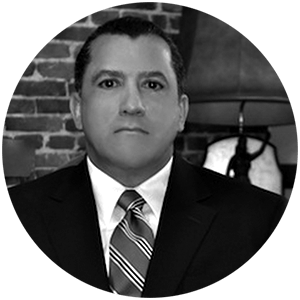 Mr. Angueira is an accomplished senior trial lawyer at Swartz & Swartz, P.C., who has obtained record breaking results for his clients. He was admitted to the Massachusetts Bar in 1982 and the New York Bar in 1983.

He obtained his Juris Doctor degree from Boston University Law School in 1982 with Honors for his Outstanding Advocacy. He began his law career as a Law Clerk for the U. S. Attorney’s office and a Prosecutor with the Essex County D. A.’s office, followed by a Judicial Clerkship with the Massachusetts Court of Appeals.

Maillet v. ATF-Davidson Co. Inc, 407 Mass. 185 (1990)  First product’s liability case to establish a c. 93A violation and award of attorney’s fees and costs for breach of warranty in Massachusetts

Williams v. Episcopal Diocese of Massachusetts 436 Mass. 574 (2002)  Representation of female Episcopal priest who was sexually harassed and discriminated against by the Episcopal Church decided on constitutional grounds

Employment discrimination based on sexual harassment by female employee of large state agency. Largest reported settlement by state agency of $650,000.00

Manley v. Krikorian Breast cancer case resulting in judgment of $2,500,000.00 based on lack of chemotherapy with proper diagnosis

Whistleblower of major pharmaceutical company assists U.S. in obtaining $500,000.000.00 settlement from prior employer and whistle blower receives portion of the settlement worth millions

Serrano v. Dr. Lai $3,700,000.00 judgment against doctor for misdiagnosis of HIV and AIDS where patient did not have the condition

Smith v. Osathanondth, $2,000,000.00 settlement in abortion death case where doctor was stripped of his license to practice medicine, convicted of manslaughter and sentenced to jail

MEET THE OTHER ATTORNEYS

At Swartz & Swartz, P.C., we are very proud of our high-caliber legal talent, and we assure you that your case will get personal attention.